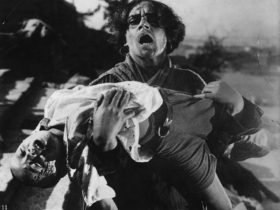 Moonlight follows our character Chiron, also known as Little and later Black, through three stages in his life in Miami. It explores the difficulties he faces with his sexuality and identity, including the physical and emotional abuse he endures growing up.

The first stage of the film follows Chiron, who at this stage is referred to as “Little”. It explores his terrible home life with a crack-addicted mother, his search for a father figure, who he finds in Juan, a local drug dealer and the bullying he suffers at school, where he is called “faggot”, a word he is yet to understand.

In the second stage of the film, we follow Chiron as a teenager, a boy still living with a drug-addicted mother who has now turned to prostitution. His life at school has worsened as the bullying continues, and he is struggling with his identity.

We meet his childhood friend Kevin, who reveals he has detention he received for being caught having sex with a girl in a school stairwell. This leads to many internal conflicts in Chiron, who dreams of Kevin having sex, leading to great confusion for Chiron. Finally, one evening, they both end up on the beach nearby, smoking a blunt together, releasing their feelings for each other. The two friends end up kissing, and Kevin masturbates Chiron.

After further bullying in school, where Kevin is forced to attack Chiron through a gang hazing ritual, Chiron’s world changes, a switch clicks in his head, and he decides to attack the gang leader, brutally beating him with a chair. The last we see, Chiron is being taken away by the police.

In the third part of the film, we see Chiron as an adult, who goes by the name “Black”. After leaving prison, he has worked himself up to some notoriety as a drug dealer in Atlanta. At this point, he has a showdown with his mother, who apologizes to Chiron, and they reconcile. Then, out of the blue, Kevin calls Chiron, telling him that he lives in Miami, working in a diner and inviting Black to visit if he is ever in town.

Black decides to go visit, driving all the way to Miami to meet with Kevin again. They spend time reconnecting, both at the diner and his apartment. What is revealed is that Chiron has not been intimate with anybody since their encounter years ago.

A significant theme of Moonlight is black masculinity and its interactions with sexual identity. It’s significant that the film uses a triptych form to explore these themes as it allows us to see the battles of adolescence that lead to consequences in later life. Chiron’s odyssey is a quest to find his identity, forever changing his place and purpose, only to consistently fail in doing so.

Homosexuality has long been a sensitive issue in the black community, particularly in the hyper-masculine, gang driven, low-income communities across America. Being a gay man within the black community has been associated with homophobic judgement by peers because black gay men are seen as weak. In the film, Chiron is placed in this divide as a black gay man. It alters his presentation of masculinity as a strategy to avoid ridicule because homosexuality is viewed as incompatible with black masculine expectations.

But Chiron’s choice to value masculinity over the desire to be loved is evidently damaging by the end of the film. Even though through illegal means, he has made something of himself and lives a somewhat normal existence, the cost has been a suppression of his true feelings, never having loved since that fateful night, many moons ago.

Although the LGBT themes present in the movie are significant, the story is about much, much more. The film is about growing up, adolescence and humanity that are relevant for all. The struggle of absentee parents and finding parental figures elsewhere and the impact their actions have upon one’s life, are all very significant. In addition, the themes of bullying and peer pressure and the effects that a life of crime have upon an individual’s trajectory are also highlighted.

There are fantastic performances from Trevante Rhodes, Ashton Sanders and Alex Hibbert, who all provide an authentic and necessary look into a very human experience. The narrative is so rich, subverting expectations at different turns and creating a tender and profound tale that is completely deserving of the Best Picture Academy Award it received in 2017.

Well, that’s it for this review of Moonlight!

What did you think of Moonlight? Do you love the film as much as I do? Let us know in the comments below.