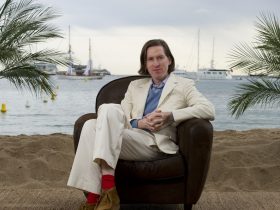 Filmmaker Chloé Zhao is going from strength to strength. The Chinese-born writer-director has worked exclusively in the west, having had great success and critical acclaim with Songs My Brothers Taught Me (2015) and The Rider (2017). Her latest offering Nomadland (2020) stars Frances McDormand as a recently widowed woman who decides to live in her van and embarks on an odyssey across the Mid-West desert lands of Arizona in the United States. This is a quiet, unassuming and pensive film about grief, loneliness and one woman’s journey to re-discover herself and find true freedom on the open road.

This film is inspired by the non-fiction book Nomadland: Surviving America in the Twenty-First Century by American journalist Jessica Bruder. The Great Depression of 2010 left millions of people in dire straits, and the casualties of this economic disaster are still suffering the effects over a decade later. The older generation who took to the desert lands of the Mid-West in their trailers and caravans are the subject of this book, which explores their transient lives and search for meaning beyond the trappings of modern society. The movie covers this ground from the perspective of Fern (McDormand), who has decided to live in her van after losing her job and her husband, both of these things having been a predominant part of her adult life. Fern is a fiercely independent individual who would rather tough it out on her own than accept any help from concerned friends or family. Without labouring the point or spelling it out for us, we soon learn that this is a character who is in metamorphosis; evolving into a new life as she teaches herself to let go of the past.

Fern is a very realistic character who perhaps does not know what it is exactly that she is searching for. All she does know is that the answers lie in the future, somewhere further down the road. The past is dead and gone, and her grief is the only thing she clings to as she moves away from a painful memory, towards unknown prospects. When her seasonal job at a huge Amazon factory ends, Fern decides to drive out to Arizona to meet up with a friend and former co-worker who has told her all about the van dwelling transient community that live a self-sufficient life in the desert. There she finds a disparate group of people who are organised by community leaders like Bob Wells. Here people share resources, information and survival skills with one another, and a strong sense of communality is apparent. Despite her independence, we witness Fern becoming swiftly ingratiated with the tribe and enjoying a reunion with her friend Linda. Both Linda and Bob are amongst several characters who are playing fictionalised versions of themselves and in this way Nomadland follows in the tradition of other great works of realism that utilise non-actors in roles that they have previously inhabited in real life.

After spending some time getting her bearings and learning some harsh survival lessons from fellow nomads, Fern also meets David (played by David Strathairn), and despite obvious chemistry between the two, she is initially unwilling to allow herself to become attached to him. Their relationship slowly develops into a warm friendship, and David begins to represent stability and reliabilty in Fern’s life, two things that she seems to be unable to accept. The narrative is not the important element in this film, and anyone expecting a “story” in the traditional sense of having a beginning, a middle and an end, complete with character arcs and a supporting cast of colourful characters or any kind of happy-ever-after, will be disappointed. Nomadland reflects its content in its form, in that it is often solitary, quiet for lengthy periods, often absorbed in reflection and reliant on the audience engaging their own propensity for empathy. What we are witnessing is a grieving character wondering the desertlands of her own psyche, trying to make some sort of sense out of what has become of her life. Questions we might often ask ourselves… How did we get here? Where did all the time go? What will become of us? Where do we go from here?

It is difficult to pin down this film, but I would describe it as more of an emotional journey than a physical one. McDormand is perfectly cast as the average blue-collar worker who, having lost all that mattered to her, decides to look for something completely new and unique in order to be able to move forward. The performances by the non-actors are both competent and at times incredibly moving. There are several scenes in which some of the characters divulge very personal and emotional stories to Fern and these scenes are very well constructed and powerful, always maintaining an extremely strong sense of reality. At times, it is like you are sitting there yourself, listening to the stories of people’s lives. If you have any heart at all, you cannot help but be moved by what you hear and witness.

This film is a love letter to survivors. It is a movie about loss, grief, and being displaced. It comments on the importance of community at the same time as acknowledging the need for solitude and autonomy. The cinematography stays faithful to the realistic aesthetic, never drawing attention to itself and instead letting the warm and beautiful landscapes speak for themselves. The score is equally sparse and unassuming, only pointing towards the deeply emotional themes during the frequent moments of reflection. The scenes we witness serve as pieces of a mosaic and lead us to reflections on time and emotion that would otherwise be lost if there were instead an overload of dialogue and narrative. Having just won Best Motion Picture – Drama and Best Director at the Golden Globes, I expect we will see more awards for this picture by the time the Oscars finally arrive. A wonderful American indie film that will reward those with the desire to see something poignant and real.