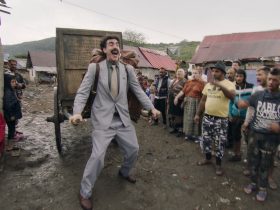 Having really enjoyed the first instalment, I was looking forward to seeing Wonder Woman 1984 (2020). In fact I thought Wonder Woman (2017) was one of the best recent efforts from the DC universe. The origin story and subsequent first adventure for the titular hero was handled with style and dare I say it, well written. As far as superhero movies go, I thought it was certainly one of the better efforts. Unfortunately, none of the winning formulae were administered in the latest episode and I regret to inform you that WW84, for all the hype and fanfare, was a terrible let down.

The bulk of the action takes place in Washington D.C. in the year 1984, but the movie starts with a flashback where the child Diana is about to take part in a special athletic event on her home island of Themyscira. The sequence sees the young princess compete against the very best warriors on the island who are all adults in their prime. There are some great action set-pieces here and some nice call backs to the original film with cameo appearances from Connie Nielsen and Robin Wright, who reprise their roles as Diana’s mother and aunt, respectively. This thrilling and genuinely fun opening gets WW84 off to a great start, but unfortunately once the timeline flashes-forward to 1984, the movie begins to falter.

60 plus years after the events of the first film, Diana Prince now works at the Smithsonian Institution as a senior anthropologist, specialising in Mediterranean civilizations. She also fights crime as her alter-ego Wonder Woman. Due to her god-like powers, Diana has not aged at all, however all her friends and allies from the initial instalment are now long dead leaving our hero feeling quite alone and leading a solitary existence. Enter Barbara Minerva (played by Kristen Wiig), a fellow boffin of rare antiquities who also seems to be leading a lonely and somewhat sad existence. When Diana and Barbara meet at work they strike up a friendship and appear to bond with one another very quickly. Barbara has been asked to identify various relics from a haul of stolen artefacts which were discovered after Wonder Woman foiled a robbery and the rarities were discovered. One of the artefacts is a mysterious crystal that bears a Latin inscription. As Diana and Barbara study the piece, Diana wishes that her former lover Steve Trevor (Chris Pine) was still alive and unbeknownst to her, this wish is granted and his soul returns to earth and inhabits another man’s body. Faceplam.

It was at this early point in the movie that I started to suspect that WW84 might be a misfire. I mean, a stone that grants wishes!? Honestly? I know this is a comic book film but that kind of plot device just seemed to be an awful stretch in the wrong direction. To summarise the rest of the plot without wishing to spoil anything for those that have not seen it yet, the “Dreamstone” becomes the central object of desire for most of the plots key players, who end up battling to control its powers and fulfil their own selfish agendas. Pedro Pascal plays Maxwell Lord, a failed oil magnate who is determined to turn his run of bad luck around by using the stone to turn himself into the stone… wait… what!? Yeah, that’s right, he wishes that he was the stone and spends the rest of the movie having others wish things that will benefit him. Barbara has also used the artefact to wish that she was just like Diana and this inadvertently bestows her with incredible powers and a new found confidence, eventually leading to the creation of her alter-ego, The Cheetah. Facepalm.

Pascal gives an incredibly bombastic performance as the tragic villain of the piece and his efforts are pretty spot-on considering the genre and the general tone of the film. No matter how hard Senor Pascal tries though, there is no saving this train-wreck of a movie as it consistently sinks deeper into a pathetic twist of p**s-poor writing and unbelievably corny contrivance. Kristen Wiig is initially interesting as the shy and mousey Barbara but her acting skills begin to crack as the character develops a dark edge. I imagine the intention was to turn a meek and likable character into a scary and formidable foe, but what we end up with is a scraggly reject from the movie Cats (2019) that is as convincing as a glove puppet with a torn ear and both eyes missing. Shocking.

I feel for Gal Gadot, like the rest of the world she had a pretty bad run of luck in 2020. After being lambasted for her ill-advised celebrity infested Imagine sing-along, she also appeared in this dreadful sequel that will no doubt be hated by most and adored by a small percentage of hot take trolls who refuse to acknowledge WW84 for what it is, a terrible let-down full of hammy performances, stilted dialogue and a litany of missed opportunities. In my opinion Chris Pine’s Steve Trevor should never have returned and the 1980s stylings should have been much more prevalent. The fact that Wonder Woman 1984 sucked so badly is a great shame as I was looking forward to this film and had higher hopes for it. Having heard that a third instalment is already rumoured to be in development, I will reserve any judgement and wait patiently, now somewhat disinterestedly for the inevitable outcome.