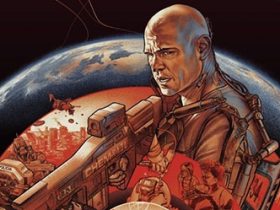 Before there was Ultraviolet (2006), before there was Leon: The Professional (1994) there was Gloria (1980). Written and directed by the godfather of American independent cinema John Cassavetes and starring his then wife Gena Rowlands in the title role, Gloria is a crime thriller based in New York City which sees the family of a six-year-old boy brutally murdered by the mob. Fate leaves him in the hands of a former gangsters moll, as they try to flee danger and are pursued at every turn. This gritty and emotional film is a testiment to a time now long gone, in a city that is much changed today from what we see on screen. Released in 1980, Gloria is one of the last times we get to enjoy 1970’s New York with it’s beaten up taxi cabs, broken down tenements and flophouses and of course, the iconic subway trains. This exciting film is equally emotional as it is violent and proves that if you want a job doing right, then you ask a woman.

The movie begins as Jeri (Julie Carmen) returns home with the groceries to find suspicious looking men lurking about in the lobby and hallways of her building. As she reaches her apartment we quickly learn that her family is in immediate danger. Her husband is a book keeper for the mob who has been earmarked to turn states evidence for the FBI. Right from the very beginning the tension is ramped up, and much like the aforementioned Leon: The Professional, we are made aware that there is a hit squad on the way to wipe out the family. Just before the murderers arrive, Jeri’s neighbour Gloria appears asking to borrow some coffee. Getting more than she bargained for, Jeri pleads with Gloria to take her children and hide them before the hitmen show up. Jeri’s older daughter hides in the bathroom, but her youngest, a small boy called Phil is sent away with an incriminating ledger to a reticent Gloria, who lives in a neighbouring apartment.

Gloria is not motherly in any way. Her background as a gangster’s moll has left her retired in a small Bronx apartment with nothing but her memories and her cat for company. The last thing she needs is to be charged with taking care of a small child. As the mismatched pair reach Gloria’s place, they hear the deafening sound of shotgun blasts and screams. Cassavetes spares us the massacre, unlike Besson in Leon, instead showing us the point of view of the witnesses who hear the ruckus from the relative safety of their own homes. In one instance a brave neighbour steps out to implore the hitmen to leave as one of the mobsters let’s off a warning shot down the hallway, causing the concearned party to flee back inside. Again, I was reminded of Leon, which has brazenly emulated this moment when Gary Oldman’s Stansfield fires off a random shot at an elderly lady who tells him to “leave that poor family alone”.

With his family dead, young Phil has nobody left in the world to turn to. There is only Gloria, and she is not happy about the situation at all. Having lived a hard life surrounded by criminals and other nefarious characters, Gloria considers herself a very poor choice of custodian for the youngster. She agonises over their circumstances and makes no bones about telling the young lad he should run away and leave her be, suggesting that he flee to other relatives or a boarding school or anywhere that is not directly by her side. In the meantime, the mob have used their omniscience to learn that the boy and most probably the ledger, are with Gloria. Now the dice are cast and the destiny of these two disparate characters is intertwined when a car full of gangsters pull up alongside them and demand that Gloria walk away and leave the kid to them. All of a sudden, the maternal instincts come bursting out of Gloria as she peppers the car with shots from her pistol, sending the gangsters into a frenzied flight which results in their car being over-turned.

Escaping in a taxi, Gloria and Phil are now high on the mob’s hit-list and Gloria has sealed her own fate by taking action and refusing to let the mobsters kill the young boy. From hereon in we see the relationship between Gloria and Phil begin to develop. Their connection is strengthened through their now shared peril and as much as she tries to deny and hates to admit it, Gloria has began to establish feelings for Phil. The scenes between Rowlands and Adames are very entertaining and provide moments of levity inbetween scenes of anxiety. Gloria is conflicted and at one point abandons Phil in the middle of a busy street, retreating to a bar and suggesting that he either join her their or go his own way. When her bluff is called and the youngster disappears, Gloria is wracked with guilt and sets out to find him.

Locating him near his old neighbourhood, she rescues him from the clutches of some opportunistic hoodlums, killing one of them in the heat of the moment. Here is an anti-hero who refuses to be categorised in any usual form. There are no cheesy one-liners, no bombastic and explosive action set pieces, just the gritty realism of a willful woman who refuses to be intimidated by any half-baked wannabe gangsters. Gloria uses her pistol as a promise, not a threat, and even mocks her enemies and goads them into approaching so that she can gun them down without a second thought. Rowlands is electric and completely convincing in this realistic setting and her uncompromising toughness gives more clout to her conflicted feelings concearning her affection for young Phil.

As the walls of the city close in, Gloria makes a plan with Phil to escape to Pittsburgh. She attempts to plea for the child’s life by surrendering the ledger to her former lover, who just so happens to be one of the major players in the mob that are hunting them. Despite her best efforts, it becomes clear that the gangsters will not rest until the business is settled and Gloria must once again shoot her way out of this “man’s world” in order to break free and protect that which she now loves. The ensuing scenes are presented with realistic ambiguity and we are left wondering if the titular character has survived or not.

The power of Gloria lies in the relationship betwen Gloria and Phil, which is initially antagonistic and eventually develops into a genuine heart-felt love. Whereas other films of this ilk lean more heavily on the action and suspenseful elements, Cassavetes uses Rowlands skills as an amazing actor and let’s her evoke the power and presence of former silver-screen stars such as Joan Crawford or Gloria Swanson (whom her character is named after, changing the last name to Swenson). When violence does erupt, it carries more weight, equally when emotion bubbles up to the surface, the heart strings are plucked with all the more tenderness.

This was a much more formulaic film than usual for Cassavetes and showed his ability to make an exciting action thriller, whilst also bringing his own unique style of gritty realism to the table. Rowlands is on fire as the gun-toting hero of the piece and fans of Leon who have not yet seen Gloria should hunt it down and give it a watch, to see how infuential this film became on subsequent stories that followed a similar thread. Certainly one of my favourites of this genre and despite my love for the other similar films I have compared this to, Gloria remains the mother of all surrogate protectors and a tough as nails hero that you can really invest and believe in.