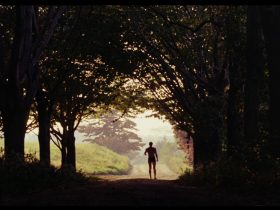 The Swimmer: A Retrospective Review

Since the trailer dropped a little while back, anticipation for Netflix latest release The Devil All The Time has been building. The fact that this movie stars Tom Holland, Robert Pattinson and Bill Skarsgård has had more than a little to do with the increased hype around this adaptation of the book of the same name, written by American author Donald Ray Pollock who incidentally, also performs the narration in the film. This dark and expansive psychological thriller has all the hallmarks of a movie based on a book, and despite its best efforts to be all-encompassing within its runtime, it feels a little bit overcrowded at times.

The story centres around Arvin Russell (played by Holland as well as Michael Banks Repeta as the 9 year old Arvin), a young kid who is raised in a world where the adults are always pious, sometimes crooked and occasionally twisted. His father (Skarsgård) has been deeply effected by his experiences in the Second World War and is obssessed with the iconography of the crucifix, which he creates a shrine to in his own back yard, forcing the young Arvin to pray along with him and invoke the mercy of the Lord, in the hope that their troubles will be alleviated and in order to “fight the devil all the time…”. Although he is reared with love and a set of moral values, the child’s life is irrevecably disrupted when tragedy befalls the family.

Sent to live with his grandparents, young Arvin shares his new home with his step sister Lenora (Eliza Scalen) who is also reared by the same surrogate parents after unspeakable tragedy is visited upon her own family. So the young orphans grow up surrounded by God-fearing elders who place huge emphasis on the power of faith and prayer. Lenora is devout and often prays at the grave of her mother. Arvin has become much more sceptical due to his past experiences with his father and does not share the same faith as his kin. As the two orphans grow up, more misfortune ensues and darkness descends on their world leading to pain, anger and ultimately revenge.

This film was only released today so I don’t wish to go into the intricacies of the story any further as many folks will not yet have had a chance to see it. This is a film littered with characters, most of whom are completely messed-up and twisted. The themes of religion, faith, sacrifice and resurrection are at the core of the story. I felt like the book probably has a lot more to say about these topics and the impact they have on each of the individuals. Make no mistake, this is grim viewing, as we get a peak into the worlds of crooked policemen, lascivious preachers, serial killers and a whole litany of crazy zealots who are so brain-washed by Christianity that one of them actually believes he can raise people from the dead.

There is some extremely heavy subtext going on in this movie and allusions to war and its effects are present throughout. The story takes place between the Second World War and the Vietnam conflict, and despite these two events being a constant prescence in the movie, neither are delved into with any scrutiny despite being ever-present on the periphery. Again, I felt that the book may delve into the consequences of war a little bit deeper than the film was able to. Having not read the novel, I could be completely wrong, but it certainly felt that way. All of the characters are interlinked on a timeline that eventually reveals how their fates are entwined and the results are satisfactory enough. The Devil All The Time does not over-egg any of its complex themes, as much as it does not delve into them too deeply either.

The performances are excellent with the large cast being given just enough room to produce some memorable material. Holland is excellent as the protagonist and shows his propensity for a serious acting career, far beyond the Marvel fare that he is most commonly known for. Pattinson also delivers a fantastic turn, both of these British actors doing justice to their Southern States accents. The cinematography is very beautiful, capturing the autumnal sunshine of the setting and providing the film with much needed room to breathe. This is something that Netflix productions are becoming renowned for, with the budget to afford an appropriate amount of attention to the details which is required from a period piece like this.

Was it worth the wait? Yes, it was an enjoyable couple of hours. Was all the hype necessary? Perhaps. Fans of the young actors will be revelling in the performances and any gothic thriller enthusiasts will be gnawing on the bones of this disturbing and edgy tale. The country music soundtrack helps to sell the setting and timeline and Campos never lets things become boring or linger too long in any one place. The fact that the author of the book was also involved in the production denotes his stamp of approval and I have to take my hat off to the effort that was put in to realise this production. No mean feat, as I get the impression it bites off slightly more than it can chew on. Perhaps another hour added to the length would have helped to do more justice to the literary aspects, which were overall a little under-explored. But as a movie, I’ve seen a lot worse. Definitely not to be sniffed at, but whether it will be included in the letter home is another thing all together.