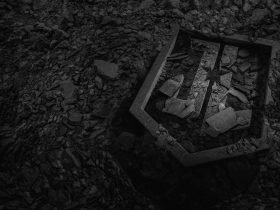 Perhaps one of the best big screen adaptations of a Stephen King novel, The Dead Zone (1983) had slipped me by until I recently discovered it almost 37 years after its release. Directed by Canadian filmmaker David Cronenberg and starring Christopher Walken in the lead role, this awesome pyschological horror movie kept me riveted to my seat throughout.

The story follows Johnny Smith, a high school teacher who is soon to be married. However, things go awry when Johnny (played by Walken) has a car accident on the way home from his fiancee’s house; the car hits an overturned tanker and leaves Johnny in a coma for five years!

When he awakes he soon discovers he has developed a mysterious psychic ability in which he has important visions. By simply touching someone, he can invoke a mirage-like trance enabling him to see into the past or future. The first time this happens, he is attended by a nurse in the hospital and suddenly sees her daughter caught in a house fire. Telling her it’s not too late, the alarmed nurse hastily leaves and arrives home in time to see her daughter rescued from the fire by the emergency services.

The second trance allows him to see into his doctor’s past. He witnesses a scene from the second world war in which the Germans are destroying a town, a young mother puts her child on the back of an escaping truck and runs off into the ruins. It is revealed the child was in fact the doctor (played by Herbert Lom). Johnny assures him that his mother survived the war and is in fact still alive. Shocked and in disbelief the doctor later makes a phone call and discovers that Johnny was right.

As Johnny slowly recovers from his injuries and the resulting coma, he becomes something of a local celebrity when news of his abilities gets out. Terrifying one skeptical reporter with news about his deceased sister, Johnny is then approached by the local Sheriff (Tom Skerritt) to help with a series of murders that have been plaguing the town. Initially reticent to help, Johnny’s concience gets the better of him and he ends up accompanying the Sheriff and his deputy to several crime scenes, eventually discovering the killer’s identity and landing himself in more trouble than he bargained for.

Proving to be all too much for Johnny, he moves house and once again becomes reclusive, tutoring students from home and having minimal contact with the outside world. He is then apporached by a rich business man, Roger Stuart (played by Anthony Zerbe), who asks Johnny to teach his son and help to bring him out of his shell. Johnny agrees to help and quickly develops a bond with the young lad. However, Johnny eventually has another vision when he comes in to contact with the boy, seeing him fall beneath an icey lake and perish. Roger is skeptical of the premonition and dismisses Johnny, which proves to be a fatal mistake.

Via Stuart, Johnny has been introduced to a local politician Greg Stillson (Martin Sheen) who is a populist figure, hell-bent on entering the White House as the next president and is a self-proclaimed ‘voice of the people’ . Johnny shakes Stillson’s hand at a rally happening opposite his home and envisages the would-be senator causing a nuclear holocaust when he becomes commander-in-chief. After consulting his old friend the doctor, Johnny decides to embark on a suicide mission to kill Stillson, thus stopping him from annhilating humankind in the future.

The film is a three act structure; in the first act we see Johnny’s accident and recovery which reveals his new-found powers, this leads to him helping the police with their investigations. In the second act Johnny takes on the job of tutoring Roger Stuart’s son and in the third act he decides to try and bring an end to Stillson’s path of destruction. When watching The Dead Zone, one gets a sense of the literary source material, in that the story is rather large and expansive. I have thus far failed to mention there are the additional character threads that involve Johnny’s relationship with his parents and more prominently with his former fiancee Sarah (played by Brooke Adams), who has moved on with her life, got married and had a child whilst Johnny lay in a coma.

In other words, there is a lot crammed into the 1 hour 45 minute run-time and it does feel a little too much at times, but having said that the film rockets by at a lightening pace and never once gets boring. The performances are all excellent, with each character given just enough screen time and development to be completely believable and necessary to the story that is being told.

It is perhaps the character of Greg Stillson that draws the most paralells with the current political climate in the United States. We now see a populist figure in the White House whose flagrant megalomania is constantly threatening to remould the world to fit his own authoritarian will and twisted vision, whilst completely ignoring the dangers that humankind faces in the form of the climate crisis and the Covid 19 pandemic to name but two. Stillson is an agitator and a rebel-rouser who’s gift for communication wins him favour with the little man as well as impressing the big shots of society. He will tell everyone what they want to hear and lie through his back teeth in order to get what he believes he is destined for… unlimited power. Here’s a short video of author Stephen King talking about these similarities…

The Dead Zone is extremely well directed by Cronenberg and rightly established him as a new voice in horror cinema for the remainder of the 1980’s. Both the score and the cinematography are of an unusually high standard considering the genre, perhaps not as painstakingly fastidious as Kubrick’s The Shining (1980), but certainly a cut above the usual scrappiness of other chiller movies of the era. The film is undeniably engrossing and remains unique in terms of its content. The power bestowed upon the main character is never explained, but one never feels like it needs to be. We simply accept what has happened and are glad to see what will transpire as a result.

Certainly a movie for all fans of horror, Stephen King, Christopher Walken or David Cronenberg. The Dead Zone will stay with you after seeing it and is bound to continue to enjoy a cult status for many years to come. For my money it is certainly one of the most successful Stephen King inspired films and one I’m glad did not completely pass me by. It is currenltly availble to stream on Amazon Prime.