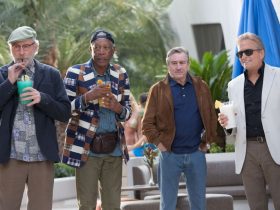 Resistance is a 2020 film that explores the French occupation by Nazi Germany during the second world war, as seen through the eyes of the famous French mime Marcel Marceau. The son of a jewish butcher, Marceau went on to become a world renowned performer, winning people’s hearts with his own brand of traditional mimicry that celebrated “the art of silence.”

During the second world war, Marcel became a member of the French resistance who fought against the German Nazi invaders and the French Vichy Government. These forces were activiely rounding up Jewish civilians (as well as gypsies, political prisoners, disabled people and all other “undesirables” on the fascist hit list) and sending them to Polish death camps, where most of them perished in the Holocaust.

Marceau successfully managed to help evacuate thousands of Jewish children and adults to Switzerland throughout the occupation. He used his talents as a mime to silently entertain the young ones, keeping them amused on the long journeys across the French-Swiss border. After the war he helped the allied forces as a liason officer and even entertained the troops with his ‘Bip the clown’ one man show.

The film covers all these aspects of Marceau’s life, yet it is not truly a film about Marceau. On the contrary it attempts to be many other things, such as an action movie, a love story, a holocaust film and a historical drama. Despite its best efforts, the overall focus becomes too thinly spread and what we end up with, is a little bit of each of these things, yet not enough to satisfy any of them. Unfortunately, this all comes at the expense of Marceau himself, who the film treats as more of a catalyst to a chain of events rather than a centre point from which to revolve around.

The performances are passable, though at times in danger of recedeing to mediocre. Eisenberg does a good job of playing Eisenberg, but one cannot help but think that a genuine French actor would have done a much greater job at portraying the master mime. Fans of Game of Thrones will be pleased to see Bella Ramsey in a key role as one of the Jewish evacuees.

In the very first scene, we are introduced to her character in an idyllic family environment which is immediately turned upside down due to a Nazi raid. The intention here was to shock and stun the audience into a terrified condition, setting the tone for a completely heavy and gritty piece. However, this tone is abandoned almost immediately as we then join a cheeky young Jewish butcher who dreams of a life as an artist, in the relatively peaceful setting of sunny Strasbourg. It is this jarring comparison that continues throught Resistance, never settling on either the light-hearted approach or the horrific and grisly reality.

Matthias Schweighöfer’s performance is notable. He plays Klaus Barbie, the infamous Nazi killer. Despite the limited material to work with, he does a very good job of reminding us of how sinister and depraved an SS officer archetype can be. You have to feel sorry for these young German actors who only have a chance at Hollywood exposure by playing monsters of this type. Even Christoph Waltz only rose to Oscar-winning heights after playing Hans Landa, despite having previously worked for 30 years as an actor.

The political economy of the film is relevant and to be awarded some degree of respect. With right-wing fascism rearing its ugly head again throughout the world, now more than ever, there is a need to be reminded of the despotic savagery of the Holocaust and the results of Nazism upon the world. Evil men like Klaus Barbie still exist and would love to see a return to ‘the good old days’ of mass murder and wholesale slaughter. It was down to people like Marceau and Oskar Schindler who put their own necks on the line to resist and save countless lives in the process.

Unfortunately, unlike Schindler’s List, this film fails to be consistent enough in any one direction. It therefore meanders all over the place and disappoints on the whole, which is a great shame. It serves as a decent enough introduction to Marcel Marceau and his particular endeavors during the war, but this is all. It is over-indulgent in its portrayals of both good and evil, and fails to strike a balance as a solid work. No wonder then that it only took $7,464 at the box office before Covid 19 forced it on to the modern equivalent of the rental shelf. Now streaming on the internet for those wishing to see what all the fuss wasn’t about.