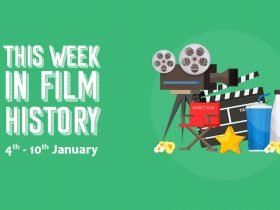 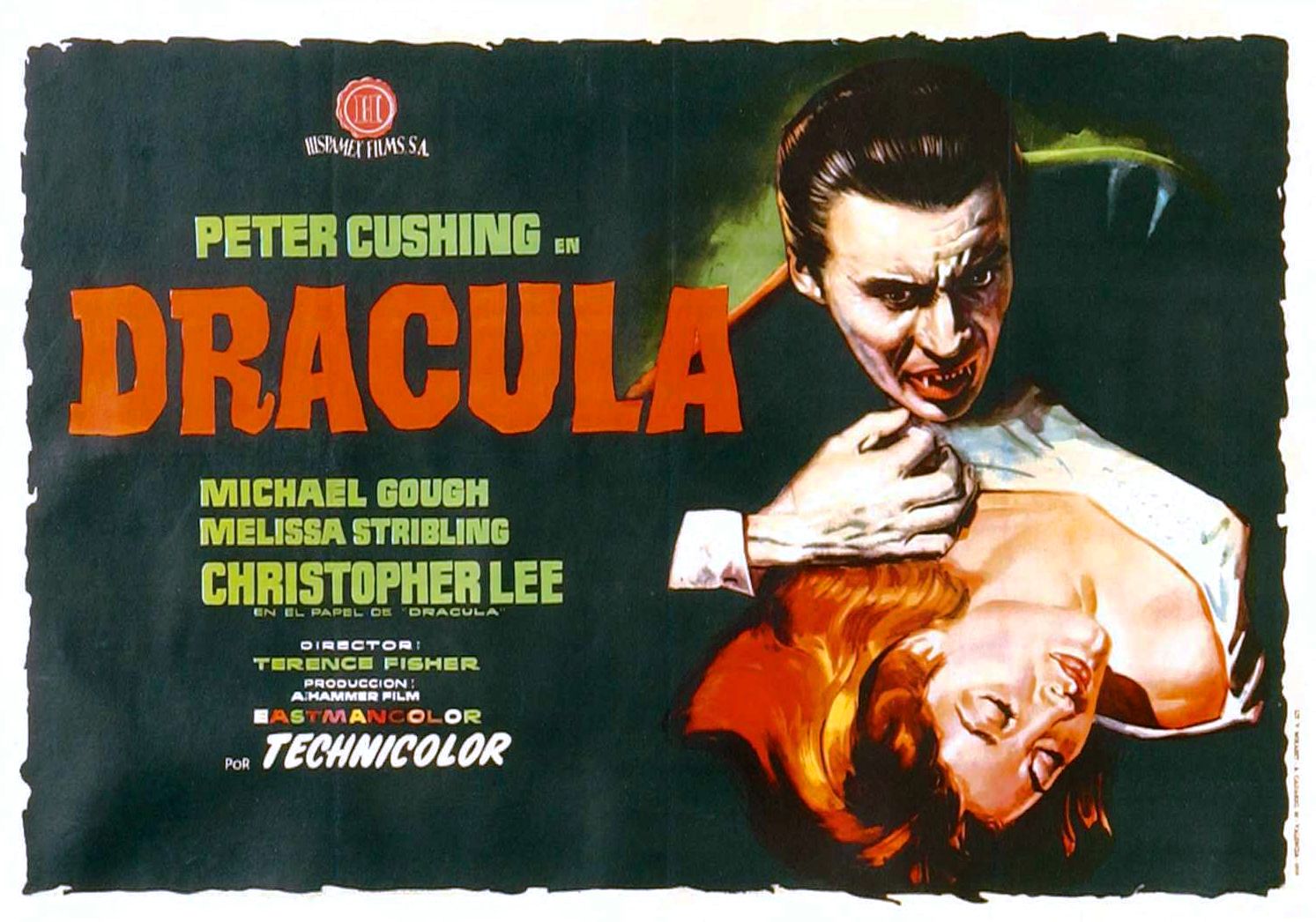 In what was Hammer’s second foray into pure horror, ‘Dracula‘ or ‘Horror of…’, as it was renamed for the American release, was the first British film to tackle Bram Stoker’s famed novel. After F.W. Murnau’s unofficial version Nosferatu and Todd Browning’s Universal feature, Terrence Fisher’s film is widely recognised as the third cinematically significant presentation of the title character.

Following the huge success of 1957’s The Curse of Frankenstein, Hammer reassembled its key crew members some of which included, director Fisher, writer Jimmy Sangster, composer James Bernard and of course the two men who would become the company’s marquee stars, Peter Cushing and Christopher Lee.

Made for a budget of under £82.000, Sangster condensed the story, switched key locations to accommodate the changes and cut out major sequences which were deemed too expensive to shoot. However by scaling down the novel, the film gains a tighter focus on the narrative and manages to deliver a slick gothic tale that rattles along at a mere 83 minutes.

‘Dracula’ opens with Jonathan Harker (John Van Eyssen) arriving at Count Dracula’s castle to which he enters under the guise of the new librarian but on the contrary, is actually there as an assassin. Here Harker meets the castle’s two inhabitants, a nameless vampire woman who he soon becomes the victim of and the prince of darkness himself played by a commanding Christopher Lee. Sometime later Dr Van Helsing (played by the excellent Peter Cushing), arrives at the castle where a carriage carrying a coffin bursts out of the entrance and races off. The Doctor finds the now vampire Harker and stakes him, but then discovers that the count is nowhere to be found. The story then moves to the Holmwood house where Van Helsing goes to inform Harker’s fiancée Lucy, her Brother Arthur and his wife Mina about Jonathan’s death. However as the story unfolds we discover Dracula is also in town and his attention is firmly fixed on the Holmwood women.

This is the fourth version of Dracula I have seen, the others consisting of Nosferatu (1922), Dracula (1931) and Bram Stoker’s Dracula (1992). With the exception of Coppola’s film, trying to figure out which version is best is a dubious exercise and ultimately very much a subjective one.

For me personally though, whilst Hammer’s feature may not be the character’s greatest overall film, it is certainly my personal favourite. As soon as the opening titles begin so does James Bernard’s thunderous main theme. Which whilst letting us know we’re in for a horror story also serves to give the film a sense of grandeur and scale, contrasting the fact that it is a fairly low budget production. This score combined with Bernard’s Robinson’s wonderful set design and Hammer’s use of Technicolour, which features generally muted tones except for the vivid reds, blues and greens, give the film a suitably gothic look and atmosphere.

Then there is the Count himself who is first introduced looming at the top of a staircase, predominantly as a silhouette concealed in a full length cape in which he effortlessly drifts down the stairs. Tall, lean and handsome with an far more articulate use of the English language than his Universal predecessor, Lee feels like the natural cinematic progression of the character.

When discussing Dracula on film, it is difficult not to mention Bela Lugosi’s portrayal, whatever you may personally think of his interpretation you cannot ignore the impact it has had on popular culture’s perception of the character. The slicked back hair with the bow tie and cape that has the large collar, the thick Hungarian accent, chances are, whether you’re familiar with the universal film or not, that this is the image you traditionally identify with Dracula.  The former film’s story allowed the Count to interact with the other characters throughout its duration where he comes across as a sinister stranger. Admittedly the Universal feature was based on a stage adaptation so the performance is naturally more theatrical and due to the times  in which it was made, there is no surprise the actor occasionally drifts into camp.

In Hammer’s version apart from his initial meeting with Harker, Dracula does not say much and is a known monster from the offset; he exudes menace, a more traditional bogeyman that hides in the shadows only appearing to descend upon his chosen victims. A decidedly more dashing creature than the more typical monsters of the genre, this only serves to present him as more of a threat to the women he targets, one being a bedridden young lady who has just lost her fiancé, the other a wife in a lacklustre marriage. Lee’s Dracula may not quite be cinema’s most famous depiction of the character, but there is a strong argument for him being the best.

Although it is Christopher Lee’s monster that is sprawled across the poster, it is Peter Cushing’s name solely featured above the title and as Van Helsing he is simply magnificent. The character has been modified from the book, a now younger man who becomes a slightly more traditional hero. A Doctor with the sole focus of ending Dracula’s reign of evil, it is a dignified performance that lends weight to the proceedings and Cushing is totally convincing.

He is the happy medium between a scientist and a soldier, combining the best qualities of both. He approaches everything with care and measure but will leap into action if the moment calls for it. I cannot think of a greater version of the conventional monster- hunter role. It is a testament to the character that Hammer’s next Dracula film did not actually feature the title vampire, but did retain the services of Cushing’s doctor. It’s the best performance of the film and I would happily have watched a series of his further adventures had Hammer gone in that direction.

The two genre titans aside, it is the women of Dracula who are all very effective. Valerie’s Gaunt’s nameless vampire does helpless and deadly rather well in equal measure. Carol Marsh’s possessed Lucy is suitably creepy and Melissa Stribling is perfect as Mina Holmwood, in the film’s strongest female role. When Dracula goes after her he is really upping the stakes (sorry) and when he strikes, Stribling plays the scene superbly.

However none of this would work as well if it was not for the crew behind the camera. The first shot of Dracula that I mentioned earlier is brilliantly composed. The way he is framed and lit throughout the film and accompanied by Bernard’s bombastic score makes every one of his appearances feel like a real event. Fisher’s direction is also very good, although the film is short it never feels rushed and the story unfolds at a fairly deliberate pace.

Dracula doesn’t try to constantly layer tension like many horrors have since, but rather has moments intended to make audiences jump which lead to tension or a heightened drama within the specific scene. If there is one fault I have with the film it is a bittersweet one. On the one hand it is a shame that Hammer did not have the budget to make a more epic Dracula, as there is obviously a larger story to be told. On the other, the film works as it is, short and focused and it is this compact approach that works so well.

By modern horror standards the content is fairly tame, however in 1958 the violence would have been very strong as well as the brusk representations of sexuality. Both of these fell foul of British censors at the time and only in recent years has some of the lost footage been resurrected in Japan. A few seconds that make up an alternate shot of Dracula’s advance on Mina make the scene a lot more sexual, despite not being in any way explicit.

As a result of the initial Hammer Horrors such as Dracula, the interest in Gothic cinema was reignited, leading to the Italians take on the genre as well as the wonderful Corman/Poe films. Hammer’s Dracula is rightfully considered a horror classic. Time has been pretty good to it and the film is still beautiful to look at.  More of a Gothic fable than an all out fright fest, Halloween is the perfect time to introduce or reacquaint you with what is arguably Hammer’s most iconic monster.