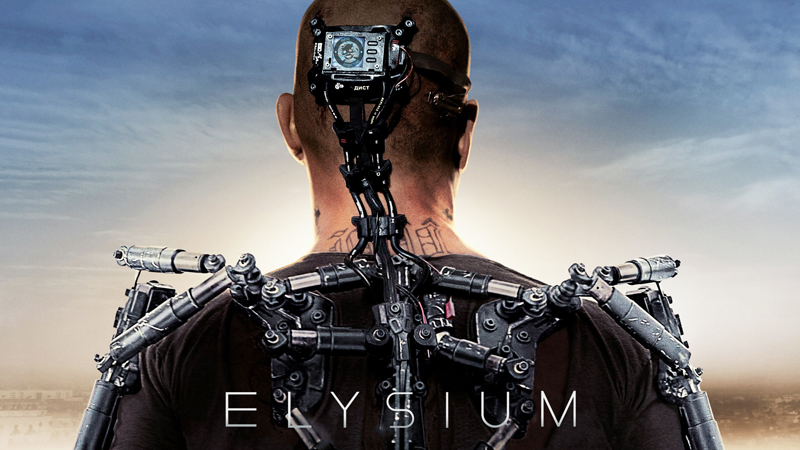 District 9 was easily one of the best science fiction films of the last decade, so with that in mind, writer/director Neil Blomkamp’s sophomore effort Elysium was one of my most highly anticipated films of the year. Armed with a $115 million dollar budget and Hollywood A-listers Matt Damon and Jodie Foster in lead roles, does Elysium live up to the high expectations set by Blomkamp’s spectacular debut?

Set in the dystopian future of the year 2154, Earth is overpopulated; its cities are presented as decaying favelas inhabited by the working class and the poor and surrounded by baron, scorched deserts. In complete contrast, the elite have fled Earth and live in an enormous space station named Elysium. A paradise filled with pristine white mansions, complete with luscious gardens and their own swimming pools. The main assets of each home however are the medical bays which can cure any disease or illness in seconds. Unfortunately for the people of Earth, the rich are not sharing this technology leading to many people scraping together all the money they have in the hope of getting an illegal shuttle to this space utopia. The main plot of the film focuses on ex con Max Da Costa just trying to get by on earth until an accident at work leaves him in dire need of Elysium’s medical resources in order to save his life.

Whilst evaluating Elysium it is impossible not to compare it to District 9 as it treads familiar ground, primarily the theme of segregation, in this case though on a much larger scale, Elysium plays more like a traditional Hollywood production and again proves the age old saying bigger is not necessarily better. The film begins with a schmaltzy prologue introducing protagonist Max as a child before shifting the narrative to 2154 where we meet him as an adult played by Matt Damon who is solid as the down on his luck blue collar hero. Max goes through a similar story arc to District’s Wikus but where the latter was a more flawed character who the audience empathised with as the story progressed, Max’s begrudged hero is more of a stock movie saviour and as a result Elysium lacks the emotional punch of Blomkamp’s previous effort. Jodie Foster is effective as Jessica Dellacourt, the Elysium station’s secretary of defence, a ruthless ice maiden who will do whatever it takes for her own political gain, however the role is underwritten and as a result she come off as a two dimensional villain.

The most entertaining character of the film is Kruger, a sleeper cell mercenary played by Sharlto Kopley and a psychopath who takes great pleasure in the dubious tasks his job entails. Despite not being particularly physically imposing, Kopley plays the sadist with a ferocity and menace resulting in a cunning boogeyman that poses a continuous threat to Max. The same unfortunately cannot be said for his two henchmen who sometimes come across as heavies of the Rocksteady and Bebop variety.

Visually the film is stunning. Blomkamp paints a tragic portrait of future Earth, the cityscape looks suitably ravaged in which every area is presented as a slum. The police are robots as is Max’s parole officer in a scene which evokes memories of Total Recall’s Johnny cab. The humans that are authority figures don’t display much more emotion than their electronic counterparts. It is classic cinematic dystopia, a battered version of the world as we know it where the only advances are technological and only serve to hinder as oppose to help mankind.

Elysium on the other hand looks like a corporate utopia, as if Beverly Hills has been relocated to a giant greenhouse in outer space. The action scenes are very well staged with the highlight being a kidnapping attempt that features Max’s first encounter with Kruger. The special effects are also excellent and CGI and live action blend seamlessly.

The main problem with Elysium is that much of it feels like a watered down version of content the director has covered before. In District 9, we saw the story from the human and alien perspective, whilst there is some diversity shown amongst the inhabitants of Earth, the elite are very much just portrayed as bad. They might well be, but we don’t get a chance to gain a greater understanding of them as most of the film focuses on Earth. If my cinema is going to be political I prefer it to lean to the left. However Elysium is painted too broadly in black and white and rather than making any profound social commentary it just wilts into a simple socialist fairy tale.

Elysium functions well as a sci-fi action movie. It’s not a bad way to spend two hours and the scope and spectacle make it worth seeing on the big screen. It’s as good as most of the other films I’ve seen this summer, but when compared to Neil Blomkamp’s previous work it feels like a diluted glossy Hollywood retread. Oh well here’s hoping he’s got something better up his sleeve for next time.